Hey Mikey, He Likes It

I can honestly say that I am a fan of flash fiction. Now. 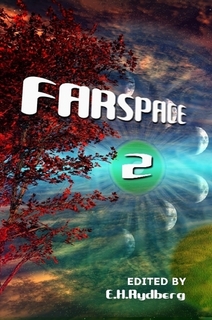 Having just had some flash fiction published in the recently-released Farspace 2 anthology. On page 187, you will find my incredibly short piece of flash fiction called “Onward.”
Ironically, I wasn’t a big fan of flash fiction up until about two years ago. Whenever I saw FF (flash fiction) on Writing.com, I would roll my eyes and bypass it. I like to write short stories, but I just couldn’t see myself being limited to 1000 words, much less 500.
Then, I got some real inspiration – free gift points.
But, boy was it tough. My first attempt at flash fiction came in at 3400 words. After some severe editing, I got it down to a more manageable 3100 words.
My next efforts gave me more experience and confidence and I was able to craft tales of just under 3000 words.
Clearly, I was not quite getting it.
So, I gave up and stopped eyeing those flash fiction contests so snobbishly. I figured that if I could craft a story within their prescribed word limits, then what might I be able to accomplish in longer form. Their structured form gave me something to aim for. Sounds normal until you remember that past admissions have pegged me as the man who used to write essays and theme papers in school without using an outline. I wasn’t particular to planning.
Now, I was. Because I had to be.
Using an FF contest known as “Short Shots” which used pictures as themes, I wrote and won my first Short Shots with “Feedin’ the Fishes.” Next came “Onward” and then one considered by fellow WDCers as one of my best – “The Farm” (and even that one caused me to regress somewhat when I wrote a longer form to flesh it out for the dozens of reviewers who asked me to).
I got a bit cocky and tried FF that limited me to 1000 words or less.
The result was “Onward,” the piece featured in Farspace 2.
I still do the occasional flash fiction just to keep myself fresh. Hopefully, our faithful followers will remember an FF Wicked Writers did back around Halloween 2010. My entry was “Top of the World,” my first foray into the world of zombies. I still get requests to flesh that out into a full-length novel.
Thus, my advice to all those who disdain flash fiction is to try it.
You might actually like it.
Unless, it's one of those 50-word FF pieces. You can keep those where the sun don't shine.
Posted by Gregory Marshall Smith at 12:00 AM